Nowadays, being mobile is very important. Every student of Paderborn University gets a Semesterticket with which they can travel all around North Rhine-Westphalia. 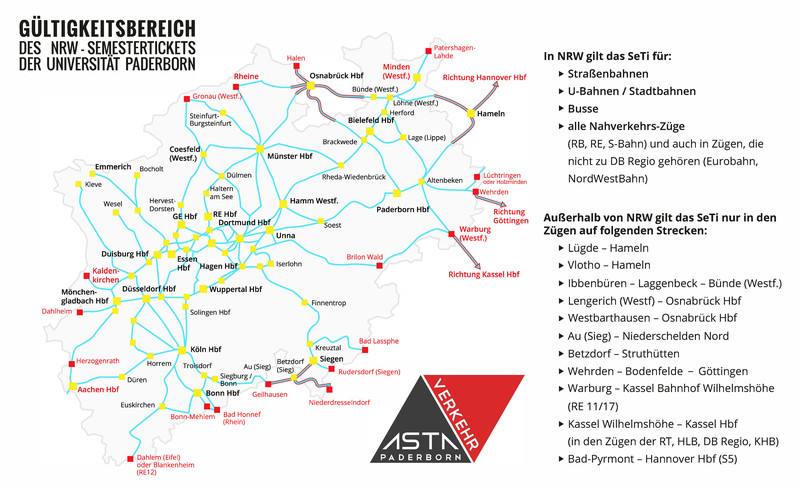 What is the semester ticket and where is it valid?

Every enrolled student of Paderborn University receives a semester ticket. In combination with your Student ID it will enable you to take local buses and trains across the entire state of North Rhine-Westphalia (no ICEs and no first-class seating!).

Can I waive my semester ticket and get a refund on the semester fee?

No, that is not possible for most cases. There are a few exceptions. You can find these exceptions, as well as how to apply for a waiver, here.

Am I allowed to laminate or alter my ticket in any other way?

No! If you want to protect your semester ticket from dirt or other harm, you can put it in a transparent folder. You can get one for free at the AStA main office (ME U 210).

For how long is it valid?

For new students the semesterticket is already valid one month before the beginning of the semester (1 September / 1 March), but only on specific routes. These include the administrative districts Paderborn and Höxter, the rail transport from DB Regio NRW (see map) and the routes Hameln – Hannover Hbf (rail line S5) and Wehrden – Bodenfelde – Göttingen (rail line RB85).

Do exchange students receive the semester ticket as well?

Can I use the night buses?

Can I take an extra person with me without them paying for a ticket?

No, that is not possible. In general, the ticket is only valid for the person whose name is printed on the semester ticket.

The only exception are children under these conditions in the following areas:

You are allowed to take any number of children under the age of six without paying an extra fee. However, on the route from Warburg to Kassel this is limited to a maximum of three children under the age of six. In addition, children below the age of 7, who are not yet attending school, are entitled to cost-free transportation throughout NRW until their first day of school (the school year usually officially starts on August 1st of any given year).

Additionally, in the rail transport from DB Regio NRW (see map) you are allowed to take a maximum number of three children between the ages of 6 and 14 with you without any additional fees. These same conditions also apply for the routes Hameln – Hannover Hbf (rail line S5) and Wehrden – Bodenfeld – Göttingen (rail line RB85). The other transit areas do not allow any additional persons over the age of six.

Can I take my bicycle on public transit with the semester ticket?

No, you will have to pay an extra fee. In most cases, it costs approximately 5€.

An exception are folding bikes, which can be transported without any extra cost. The same holds true for e-bikes and e-scooters. This regulation is valid in the entire NRW area as well as on the trains to Hanover and Göttingen. Moreover, on the train to Kassel you can also transport a regular bike without any additional cost. However, please note that if the train is too crowded, baby strollers and wheelchairs are prioritized.

You did not get your semester ticket yet?

Please refer to the Service Center in the Bibofoyer (opposite the library entrance). They are in charge of sending the semester ticket and have an overview of the tickets that cannot be sent.
Phone (Hotline): 05251/ 60-5040.

You have lost your semester ticket?

Should you lose your semester ticket, please note that you need to apply for a new one via PAUL. In order to do this, you need to click „Study“ and then „Study Organisation“.